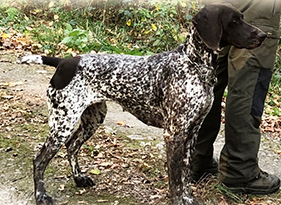 Sadie’s education has gone extremely well with Mr. Hofstetter, considered by most to be the best leader in Germany. Sadie has been the Prüfungssieger (Test Winner) at each of her tests. Mr. Hofstetter has remarked that Sadie is a beautiful hündin who is excellent in the field and the water. He continued, “Sadie is one of the best dogs I have educated and lead to a test”.

Graci started her education in the States with a Derby Prize 1, SG1 (j) at the NADKC Annual Meeting in 2012, and V1 in the fall of 2012. Her education continued in Germany with Mr. Klaus Bommers as her leader. Mr. Bommers, who has successfully lead 21 Kleemann dogs and considered to be one of the best leaders in Germany, feels that Graci is an outstanding dog with a huge nose and a wonderful personality that make her very special. Additionally, Mr. Bommers stated, “Graci is the best water dog that he has ever seen!” In 2014 Graci completed the Dr. Kleemann Prüfung where she received perfect scores and the title “KS”. In the Kleemann Zuchtschau Graci was evaluated in the Top 10. The Judges at the Kleemann stated: Overall Observation – A beautiful and elegant female, who, in every element of the test, fulfilled the high requirements of the Dr. Kleemann Prüfung.

Cuno’s pedigree reads like a who’s who in the DKV. His sire is Ungaro KS vom Hege-Haus one of the most influential sires in the last ten years. His mother is Nova KS vom Hege-Haus who was one of the best Hege-Haus females both in her testing and breeding career. Both of these parents were special dogs and Cuno appears possessed to carry on the tradition.